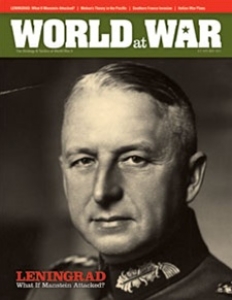 Leningrad ’41: What If Manstein had Attacked? (L’41), designed by Joseph Miranda, is a two-player alternative history wargame of intermediate complexity that simulates a hypothetical German attempt to seize the city of Leningrad in late July through August 1941. The assumption is Manstein, rather than pausing for two weeks as he did historically, simply charged ahead into the city immediately upon crossing the Luga River.

To control complexity and present an overall-force-commander’s-view of the battle, the game uses a tactically scaled map and units of maneuver coupled with an operationally scaled game turn length. The German player is generally on the offensive, trying to clear the Soviet defending force from the city prior to the end of the game. L’41 uses the system originally created for our earlier published Manila’45 game.

Each game turn equals three days. Each hexagon on the map represents 0.3 miles (0.5 km) from side to opposite side. The units of maneuver for the Germans are mainly battalions, while those for the Soviets range from battalions to regiments and brigades. Thus each unit may represent anywhere from 100 to 5,000 men and their equipment.

Articles in this issue:

Leningrad: What If Manstein Attacked? An analysis of what could’ve happened had the Germans launched themselves into the city when they had the chance.

Mahan’s Theory in the Pacific. Many aspects of the famous 19th strategist’s thinking about naval strategy were finally put into effect during the Pacific War.

Southern France Invasion. D-Day actually happened twice during 1944. An analysis of what the second landing, in the south, was a strategic disappointment.

Italian War Plans. The many plans Mussolini had to lead his country to glory