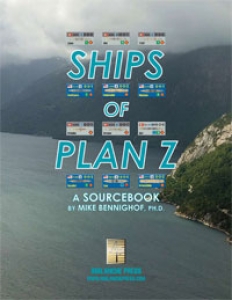 Ships of Plan Z is a sourcebook describing these ships as well as those that Britain’s Royal Navy would likely have built in response. And it has additional pieces of its own: “long” ship pieces for those that appear in other Second World War at Sea games on smaller, square pieces. You don’t have to have these pieces to play the games, but if you’re a hard-core naval gamer, then you know you have to have these pieces.

There are 105 new pieces included, most of them German torpedo boats (small destroyers in German parlance) plus anti-aircraft ships, gunboats and a flight-deck cruiser. The pieces are mounted and die-cut, the same type of wonderful silky-smooth pieces with minimal die-strike markings found in Plan Z.