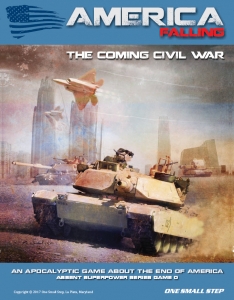 Predicting the imminent collapse of the United States is a journalistic and academic commonplace as old as the republic itself. In fact, the first op-ed pieces on that theme began appearing in newspapers--both within the country itself and elsewhere around the world--before the ink on the first copy of the constitution was even properly dry back in 1787. The genre even had a name: "declinism."

Similarly, the reasons given for that supposedly inescapable fall have generally always--from the late-18th century to the present--been divided into three categories: ethno-racial conflict, class conflict, or some mixture of the two. America Falling enables two players to simulate the entire first year of a hypothesized near-future civil war--brought on by whatever is your own favorite reason--across all of the lower-48 states.

One player commands the conservative "Red" forces while the other leads the liberal "Blue" forces. The rules also allow for the possibility of local separatist movements erupting independently of those two main factions, including: The Republic of Texas, The Islamic State in America (ISIA), New Jerusalem, Aztlan, La Raza, Aryan Nation, New Afrika, Ecotopia, and The LGBTQ Rainbow Coalition.

Conflict can take place with conventional armaments as well as Weapons of Mass Destruction. Cyberwarfare is a constant.

No two games will set up or play exactly alike. The initial territorial division between the two sides is based on major cities (chosen randomly) rather than on whole states.

Game mechanics recreate the inescapable dilemmas of fratricidal struggle inherent at the start of every civil war. The keynote centers around the fact one military has suddenly become two. That means things previously taken for granted--chain of command, supply, political loyalties, etc.--have become uncertain. Nothing can be depended on; for instance, movement allowances among the same type of units may vary by as much as a factor of 12.

Play moves rapidly back and forth during each turn, one "action" at a time, in any order the players choose: enter reinforcements from off-map areas; regroup previously devastated units; move a friendly force; attempt to subvert an enemy force to defect to your side; launch a conventional, cyber or WMD attack; move your capital or attempt an airpower surge. In the end, victory hinges on the balance between control of key terrain and accumulated demoralization within the factions.