The Battle for Ramadi 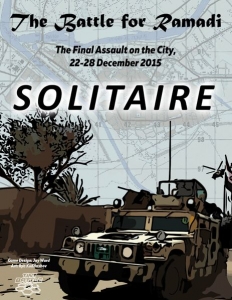 After encircling the city for weeks, the Iraqi military launched a campaign to retake it last week, and made a final push to seize the central administration complex on Sunday.

“By controlling the complex this means that we have defeated them in Ramadi,” said Sabah al-Numani, a spokesman for the force leading the fight on the government side. “The next step is to clear pockets that could exist here or there in the city.”

A U.S. defense official, speaking on condition of anonymity, said the U.S.-led campaign against Islamic State was unable to confirm at this point whether the militants had been cleared out of the government complex.

The Battle for Ramadi is a solitaire game that depicts the climatic seven days of the assault on this key town. You are the commander of the Iraqi Security Forces, and must capture the Government Complex to secure the political victory, but your ultimate objective is to liberate the city and its inhabitants. You have elite Counter Terrorism Service troops supported by army, police and militia units. Combat is brutal and unpredictable. The city is full of IEDs, ISIS fighters, and innocent civilians.

You can also call on Coalition air assets and special forces to give you the edge.

You must plan carefully, take advantage of your freedom to deliver strikes against enemy territory at will, but also be warned that you can lose the game, even on the last turn, as your casualties mount and ISIS counterattack your exposed troops.