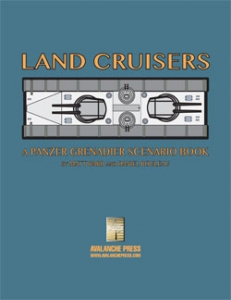 The First Great War ended in December 1916 with Wilson’s Peace, a negotiated settlement that left all parties vaguely dissatisfied (except those called on to die by the millions). The Second Great War erupted in August 1940, with Russian, French and Italian armies attacking the Central Powers in a naked grab for territory and power.

French armies pushed relentlessly into German territory, spearheaded by the massed armor formations advocated by Col. Charles DeGaulle and backed by waves of tactical attack aircraft. Caught off-guard, the Imperial German Army resisted as best it could but gave ground in front of the French and their Belgian allies. To stop the onslaught, the Kaiser’s generals decided to deploy their most carefully-guarded secret weapon: the massive armored vehicles known as Land Cruisers.

Land Cruisers is a supplement for the Panzer Grenadier game series, set in the same alternative-history background as our Second Great War at Sea games. It is not a complete game: ownership of 1940: The Fall of France and Elsenborn Ridge (and only 1940: The Fall of France and Elsenborn Ridge) is necessary to play all of the 10 scenarios included. Land Cruisers also includes eight double-sized and 72 standard-sized silky-smooth, die-cut-and-mounted playing pieces.