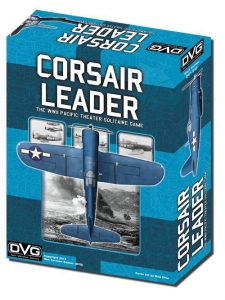 Corsair Leader is the newest game in our Air Leader series!

We are proud to break into this new era, and Corsair Leader, and the rich history of the US Navy and Marines is the perfect way to do it. Thank you for all the support you have shown for the Air Leader series!

For those of you who are new to the series, Air Leader games are entirely solitaire by design. This means you can play whenever, where ever, and for as long as you like. No opponent needed! The game system handles all the enemy decisions and actions for you!

- Detailed Dogfighting rules! - You'll select a Maneuver, adjust Position, and do your best to shoot down enemy aircraft! The AI uses the same rules for Maneuvering on your Aircraft!

- Gung Ho - WWII was all about teamwork and getting the job done. Each of your Pilot's has a Gung Ho skill that you can use to perform heroic actions!