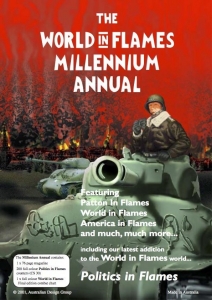 The Millenium World in Flames Annual is Australian Design Group's 2000 Annual. It is jam packed with some awesome tips and hints for all our World in Flames products. It includes:

• an America in Flames after action replay;

• a new political system for World in Flames;

• the latest strategy hints for World in Flames;

• four new campaign (Operation Star Spangled banner, The Bear Unleashed, The Duce's dream and Race to be a Superpower) set-up and notes;

• the centrepiece of the Annual, Politics in Flames.

Politics in Flames allows you to economically, politically and militarily bring minor countries into your sphere of interest during the critical years of World War II. Can you woo Czechoslovakia, Spain, Turkey and Brazil amongst dozens of other countries to help you in your war of liberation?