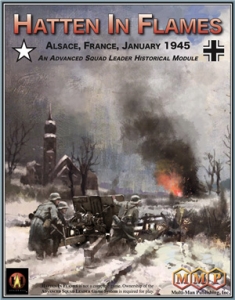 In late December 1944, the American 7th Army was overextended throughout the French provinces of Alsace and Lorraine, covering for units drawn northwards towards the vicious fighting around Bastogne. Sensing this weakness, German High Command launched Operation NORDWIND to retake Alsace and the French city of Strasbourg.

In early January 1945, after several unsuccessful thrusts, the Germans committed key panzer reserves in the form of Panzer-Division 21 and Panzergrenadier-Division 25, targeting the neighboring French villages of Hatten and Rittershoffen. The initial attack fell on Hatten and nearby Maginot Line positions manned by the inexperienced doughboys of the 42nd “Rainbow” Infantry Division. After a brief but valiant defense, they were relieved by two veteran infantry battalions from the 79th “Cross of Lorraine” Infantry Division, whose soldiers slowed the German advance but in turn, became surrounded in the villages. Tankers from the 14th Armored Division then engaged the German panzers head-on in an attempt to relieve the infantry.

The eight scenarios and two Campaign Games in HATTEN IN FLAMES focus on the first five days of the fighting inside of Hatten, as panzer units sought to break through to the open terrain of Alsace that lay beyond Hatten and Rittershoffen. These capture the portion of the battle where an intense combined-arms struggle between a few handfuls of infantry companies and tank platoons of both sides played out on a daily basis in this small French village. In rendering these encounters, the HATTEN IN FLAMES CGs provide players with all the challenging options and decisions of bigger CGs while remaining much more manageable than most. Campaign game mechanics are based on tried-and-true systems used in previous ASL historical modules.

• one box and lid

HATTEN IN FLAMES is not a complete game; ownership of the Advanced Squad Leader Rule Book, BEYOND VALOR, and YANKS is required for play.