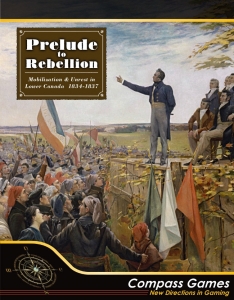 The Patriotes of Lower Canada became notorious for uprisings in 1837-1838 that prompted a bloody crackdown by the colonial authority. The battles that resulted from this escalating violence left quite a mark on the imagination and history of a modern-day nation unused to armed conflict on its soil.

But most Quebecers today know little about what led to these events. In the years before the rebellion, the demands for greater power for elected officials and for recognition of the Canadians' rights were at the heart of an ideological struggle between the Patriotes and a coalition loyal to the system in place under the British crown.

"Prelude to Rebellion" depicts this conflict of ideas as a card-driven game using key events from 1834 to 1837. In CDG-typical hand management, you will be torn between using each card’s activity points or event while doing your best to defuse your opponent’s cards. The gist of the game is that you will strive to mobilize the people of the various counties of Lower Canada and rally them to your point of view. In addition to Montréal and Québec (considered urban counties), 24 rural counties, each biased towards a faction, are represented on the board. Every county has a number of mobilization boxes, each costing a number of activity points to put a cube in it. Whoever has the most cubes in a county is said to control it.

After building up a sufficient amount of support in a county, you will try to create organizations (a grouping of leaders) in them. The more cubes in the county and the more activity points you dedicate to this action, the greater your chance of success. A fixed amount of opportunity points per turn allow you to mitigate the whims of the dice but also allow you to purchase helpful events from the 'Opportunity pool', where a few cards as well as key events of the conflict are put into at the start of every turn. Spend too many points to 'shave' a die roll and you might not be able to purchase a helpful card from the pool. Likewise, spend all your points to purchase cards and your next die rolls will be all the more stressful.

Urban counties control, rural counties control, organizations and external influence (how various surrounding powers such as Britain, France, the US, etc. are meddling in the conflict) represent the main source of victory points. Whoever has the upper hand for these four issues is accounted for on what's called a scoring track. Every time a card is played, a scoring die will be rolled. Whichever face turns up gets the associated scoring track closer to granting a proportional VP payload to the player ahead on it. Timing is everything as the scoring dice will constantly force you to adapt your strategy. Note that this mechanic is not completely random as each die has a greater chance to advance a specific track so skillful players will always come out on top.

The scoring tracks are right there on the board for both players to see. While each track will score in theory once a turn, in practice, the rural counties track might score twice while the organizations one will somehow get stuck for several crucial action rounds. You can't cheat fate forever though as each and every card play will trigger the roll of a scoring die. You will experience tense moments when all tracks are on the verge of scoring as well as moments of respite when all tracks just scored and there is a window of opportunity for you to try to improve your position on some issues.

This is not a wargame: the game ends when the fighting begins! Actually, both sides need to prepare for a war which might in fact never break out. The 'Rebellious spirit' track measures how close things are to get out of hand. The higher it gets, the more ugly and violent the conflict becomes. Just like in real life, the Patriotes might run out of time as some hot-headed leaders plunge the colony into a direct confrontation with the British army. People are fed up and the clock is ticking: if results don't start showing up, Lower Canadians might be tempted to take up arms, seeing how successful their Southern neighbors were 50 years before!

You've simulated more than your share of war. Now, play out what leads to it!

Solitaire suitability: Medium (4 out of 10)

• 150 green mobilization cubes to be used by the Patriote player;

• 125 red mobilization cubes to be used by the Loyal player;