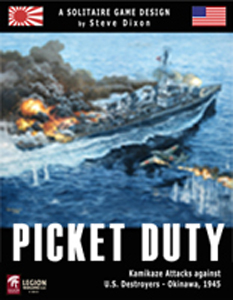 What is Picket Duty? The US Navy first faced kamikaze attacks in October 1944, near the Philippines. By the time of the invasion of Okinawa in April 1945, the US Navy devised a plan to help ward off the expected kamikaze attacks during the battle for the island. In order to provide an early warning system for impending kamikaze attacks, the US Navy established 16 radar picket stations around the island. Destroyers manning these stations - in most cases - had a Fighter Direction Team to co-ordinate and call fighters to a station to help combat incoming kamikazes.

Despite these efforts, the kamikazes still managed to get through and inflict horrific damage to US ships.

The entire air-sea battle off Okinawa lasted until August, 1945. At least 21 ships were sunk, and 194 ships suffered damaged ranging from minor to severe. Crew casualties range from 9,700 to 12,000 killed and wounded. During this period the US Navy suffered more casualties and lost more ships than in any other battle during the course of the war in the Pacific. According to James Dunnigan and Albert Nofi, authors of "The Pacific War Encyclopedia," 7 percent of all US Navy casualties during the Pacific War were sustained during the Okinawa campaign. Of the destroyer types (destroyers, light minelayers and high speed minelayers) that served on picket duty from the period of March - August, nearly half were either sunk or damaged.

The inspiration for the game came while I was reading the book, "Kamikazes, Corsairs, and Picket Ships," by Robin L. Reilly. I immediately thought of a solitaire game in which the player is the "captain" of a Fletcher Class destroyer while serving on radar picket duty off Okinawa. I jotted down my ideas and began the long process of design to printing.

Why the Fletcher class? It was the predominant destroyer class at Okinawa. Other classes did serve, but the Fletcher class allowed for more scenario possibilities. The weapon lay out depicted in the game began in July 1943 and ended in February 1945. So for game purposes the player has as his armament five 5" guns (two forward and three aft), 10 40mm Bofors AA in five twin barreled tubs and seven 20mm Oerlikon guns. In June 1945, a weapons change was initiated. It increased the number of 40mm barrels and 20mm barrels. It is not depicted in the game since the time period for the game ends in late June.

The purpose of the picket stations was to give advanced warning to the main fleet in case of aerial attack and to assist in fighter direction. Hence many of the destroyers had fighter direction teams on board. The assignment of FDT teams is depicted in the game.

Just where did most of the kamikazes appear in relation to the ship? In contacting the United States Naval History Heritage Command - they did not have the information. Apparently those figures were not compiled. While extensive reports have been made concerning ship damage and how best to combat kamikazes, the number of Japanese planes that attacked each picket station is not known. So a best guess had to be made.

Other sources pointed to the northern stations, particularly Picket Station 1 as being the most deadly (a diagram of the location of picket stations is included in the rules). Japanese planes came from bases in southern Japan and Formosa. Hence in the game, if the player is assigned to Station 1, the action could be hotter compared to other stations.

Unlike the USAAF, which utilized a clock system to tell what direction an enemy plane was attacking relative the plane being attacked, the Navy used a bearing system. Hence the positions where Japanese could attack are represented by eight degrees of bearing: 0, 45, 90, 135, 180, 235, 270 and 315.

The kamikazes attacked from every conceivable angle so to make the game playable certain decisions had to be made. The high, medium and low designations are a function of both altitude and angle of attack. Otherwise players would be bogged down as planes made their way from high to low altitude, firing as each plane made its way closer to the ship. With as many as 4 to 12 planes attacking, the player would be saddled with too many steps.

So in order to make the game playable and manageable, high altitude also represents a high angle of attack, medium altitude a medium angle of attack and low altitude represents a low angle of attack - a water level attack. Guns are assigned to the planes in these attack positions and attempt to shoot down the kamikazes. Support for your ship is depicted by surface and air assets. While each did an admirable job in helping the destroyers on picket duty, the Japanese kamikazes still managed to get through.

Once a kamikaze struck the ship, the damage caused could be deadly. In some cases, a hit caused very little damage. Some ships took numerous hits by kamikazes and stayed afloat, while some took one hit and sank. Most of the planes were armed with bombs, so not only the plane and its spilled fuel caused damage, but its bomb penetrating the ship also caused damage.

Destroyers, unlike bigger ships, did not have empty spaces to counteract flooding. To counteract flooding, destroyers transferred oil to right the ship to an even keel, and also flooded working compartments. But it only can be done so many times, as players will find out should flooding occur with damage.

Key individuals are depicted in the game. These are the officers of the ship, the master chief petty officer, and the damage repair parties. Each has certain capabilities when it comes to performing actions and players will soon find out there arent enough repair crews to repair everything - the player will have to prioritize.

The game is not meant to be a detailed simulation. But I hope the game will give players an idea of the deadly combat that the destroyer men off Okinawa had to endure. There was no where to go; no foxhole to dive into, they had to stay and take it.