Dorking 1875: The German Conquest of Britain 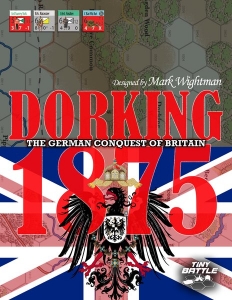 Based on the genre-defining classic of military alt-hist fiction

In 1871, G.T. Chesney's "The Battle of Dorking" imagined an ill-prepared and outdated British military humiliated by the Prussian war machine. The story sent shockwaves throughtout the horrified general public, and jump-started important reforms in the military. It also birthed a new genre, "invasion literature", which influenced sci-fi classics like "War of the Worlds" and "Day of the Triffids".

The mechanisms are simple and straightforward, with important differences in technology and doctrine built-in and handled behind the scenes so that the players can focus on maneuver and attack without having to compute odds or round off factors. The turn structure is intermingled so that the players trade off phases over the course of the turn, keeping everyone interested and engaged in the proceedings.

Tiny Battle is proud to present one version of the most famous battle that never was. Copious notes on doctrine, organization, and armaments from designer Mark Wightman puts everything into perspective, while the gorgeous and immersive period-style art from rising star Ilya Kudriashov rounds out this sumptuous presentation of an enduring and interesting subject.

One 20 page rulebook-- don't worry, it's 8 pages of rules, and the rest is gravy