Rifles in the Ardennes 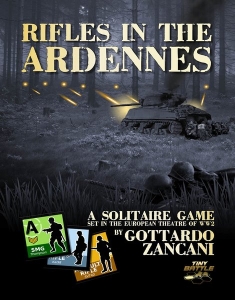 "You ask, what is our aim? I can answer in one word. It is victory. Victory at all costs. Victory in spite of all terrors. Victory, however long and hard the road may be, for without victory there is no survival.” - Winston Churchill

The quiet, frosted hills painted with ancient woods which characterized the Belgian Ardennes were rattled and thundered to life as they became the setting for one of the most renowned battles in all of history.

Rifles in the Ardennes recreates the tense action that characterized Ardennes in a unique single-player format. Designer and Artist Gottardo Zancani has replaced the literal map typical of World War II games with a stylized track, allowing for endless customization of the battlefield.

A simple solitaire system allows the recreation of small combat engagements (five to ten units per side) over a bevy of scenarios. Blind chit draws and die rolls, combined with artfully crafted charts create an impressive “artificial intelligence,” embuing the game with a true fog of war.

The rules are generic enough to cover many periods and genres (the World Wars, Classical Battles, Science Fiction, Fantasy, and more), but the units (American, German, and Russian) and scenarios are specific to the European theatre of World War II, focusing on the years 1942-1944.

Rifles in the Ardennes includes: