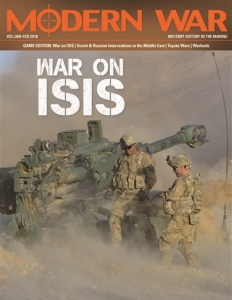 This game is set in a timeframe of the near future – 2017 through 2020 – in which the Iranians may have developed some kind of military nuclear capability. Even so, with the US likely still in another post-Vietnam-funk-type of “neo-isolationism,” the possibility for a blitz-style conventional Iranian victory across the region – aimed at fully establishing and certifying Tehran as the unchallengeable hegemon of the Gulf region – moves to the fore. The game’s scenario can also be taken as a model of a possible Iranian reply to a US and/or Israeli precision aerial campaign targeted against their nuclear development facilities.

More particularly, though, the game examines what may well prove to be the precipitating event for such a war: a declaration of full independence by Iraqi Kurdistan. Such a move would almost certainly be quickly followed by similar declarations from the Turkish and Iranian portions of Kurdistan. In turn, no new regime in Irbil could then possible do anything other than admit those two additional territories into a “Greater Kurdistan.” That would then just as quickly mean Iran and Turkey would effectively find themselves at least becoming cobelligerents (if not outright allies), with a shared interest in destroying the new country as quickly as possible.

This wargame examines the strategic possibilities and parameters inherent in the opening Iranian offensive of such a war. There are no rules for the use of nuclear weapons or any other weapons of mass destruction. The situation is on such a hair trigger in relation to that aspect of things, if one such weapon were to go off, many more detonations would be certain to follow. The idea for Tehran (and Ankara) would be to gain a victory without resorting to “game changing” WMD.

Further, the entirely playable on its own, Isis War can also be played as an expansion and update of my earlier design, Oil War: Iran Strikes. See the note below.