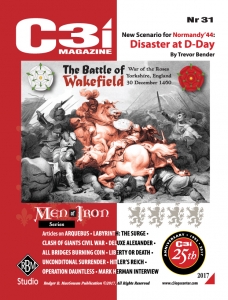 It was at Wakefield that Richard, Duke of York, met his doom. Richard was head of the Yorkist faction, and had begun the rebellion against King Henry VI that is now known as the War of the Roses. It isn't clear why he rode out that day against an army with numerical superiority, but the end result was calamity for the Yorkist contingent. About half the army perished, including Richard and the Earl of Salisbury (father of Warwick the kingmaker). Can you break the Lancastrian army before its reinforcements arrive or will you share Richard's fate?

The Battle of Wakefield is a new, fully self-contatined game in RBM Studio's C3i magazine #31, and is a part of GMT's Men of Iron series, specifically Blood & Roses (2014).