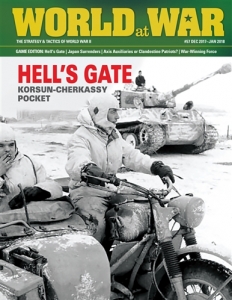 Escape Hell’s Gate covers the final attempt of the German 3rd Panzer Corps formations to reach those German units that were encircled within the Korsun Pocket between 10 - 17 February 1944. Escape Hell’s Gate is a two-player game using the standard Fire & Movement folio rules system and a set of exclusive rules that model the actual campaign. The game presents some unique challenges to both the German and Soviet player as the German relief forces attempt to break through the pocket, while the German forces within the pocket struggle to survive the Soviet onslaught. The Soviet player will be faced with moving his forces to block the relief attempt while making a final push to reduce the pocket. Both players will be fighting two battles and how well each player allocates his forces will determine the victor.

The battle of Korsun began on 25 January 1944 with an attack by the Soviet 2nd Ukrainian Front forces spearheaded by the 5th Guards Tank Army from the eastern side of the Korsun salient. The attack was followed a day later by a second attack on the western side of the salient by 1st Ukrainian Fronts forces. The forces of the two Soviet Fronts met each other near Zvenigorodka three days later. The Pocket the Soviets created centered on the airfield at Korsun, encircled most of the units of two German Corps, and was the largest encirclement the Soviets had achieved since the Battle of Stalingrad in November 1942.