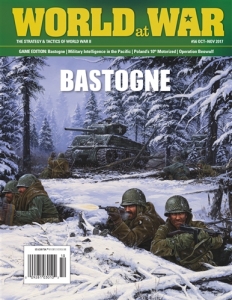 Bastogne (Solitaire) is a wargame covering the German siege of the town of Bastogne during the Battle of the Bulge, specifically the period 18-26 December when the town was surrounded. Bastogne Solo is based on Dien Bien Phu (Modern War #17), but there are some significant differences.

You (the player) command US forces, while the game system controls the Germans.

The game is a race against time. You must hold out until relieved by Patton’s Third Army. If not, the Germans take the town and possibly gain a better outcome for the Battle of the Bulge.

While a Solitaire game, Bastogne can also be played by two or more players, each taking charge of different aspects of the US defense. For example, one player can be overall commander, others command various defensive sectors, and another take charge of air and artillery.