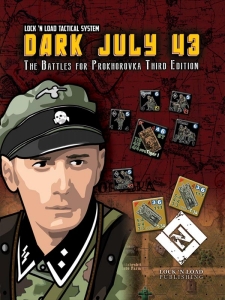 Dark July 43 is a Lock ‘n Load Tactical expansion module that depicts the brutal battles fought west of Prochorovka between July 9th and 12th, 1943, during the epic Battle of Kursk.

One 34” x 22“ non-geomorphic map and two 12.75” x 8.25” geomorphic maps that forms a historical battlefield, covering the famed Hill 252.2, the Soviet trenches to the east, and the Oktiabrski State Farm to the north. Six scenarios—five on the historical map—will test your tactical acumen as either the determined Soviet defenders of the Motherland or the brazen 1st SS Panzergrenadier Division Leibstandarte Adolf Hitler (LAH). Dark July 43 includes rules for hand-held RPG-43 anti-tank grenades, anti-tank mines and ditches, low wheat, tank emplacements, roadblocks, and much more.

Requirements: Dark July 43 is not a complete game and requires Heroes of the Motherland or Band of Heroes with Not One Step Back. This game contains some previously released material from Dark July the Battle of Prochorovka.