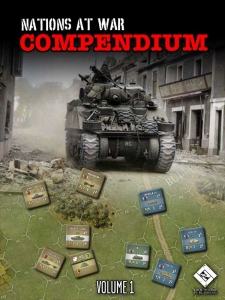 "Men, I am not a religious man and I don't know your feelings in this matter, but I am going to ask you to pray with me for the success of the mission before us. And while we pray, let us get on our knees and not look down but up with faces raised to the sky so that we can see God and ask his blessing in what we are about to do”

Here it is one one glorious package, Nations At War (NaW) Compendium Volume 1. This Compendium includes all the articles and scenarios from our Line of Fire magazine, Airborne and Operation Cobra expansions all in one package.

You will cover fighting with Allied forces fighting in Europe on the Western Front during 1944-45. Thebattles fought by British and American paratroopers at Normandy and the events surrounding the Allied breakout known as Operation Cobra from the Normandy beachhead in July-August 1944. Operation Cobra adds the Canadians, the Free French, and the Free Polish to the Nations at War series in addition to new units for the Americans, the British, and the Germans.

The NaW Compendium gives you three campaigns, Normandy, Operations Cobra and Arnhem. It's a game of risk and reward as players must learn to conserve their forces. The more lives you spend during one scenario, the fewer theyíll have to start the next. However, the more objectives players complete earn them more points which they can use to outfit and re-fit their forces.

Requirements: Ownership of White Star Rising Second Edition and Desert Heat Second Edition is required to use this product. This product contains some previously released material from Airborne, Operation Cobra, and Issues of Line of Fire magazine.