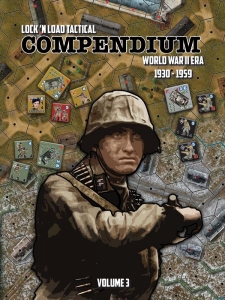 Lock ’n Load Tactical (LnLT) Compendium Volume 3. This is not so much something brand new as running into an old friend you have not seen in a while and remembering all the great times you had. LnLT has come a long way from its initial release and the Battle Packs.

LnLT Compendium Vol. 3 is the joining of two previously released products titled Battle Pack Alpha, Battle Pack Bravo with a few new scenarios. We have cleaned up the scenarios, redesigned and updated the maps and put everything into our new LnLT series style.

Requirements: The following games Heroes of Normandy, Heroes of the Motherland, Heroes in the Pacific, and Noville Bastogne's Outpost, from the Lock 'n Load Tactical Series, are required to use this product to its fullest extent. This product contains some previously released material from Line of Fire and Battle Pack Alpha and Battle Pack Bravo