Accueil > Wargames > Lock N Load > A Wing and a Prayer

A Wing and a Prayer 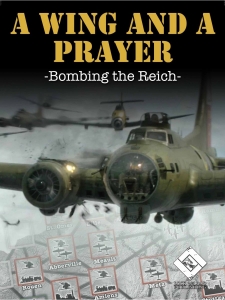 “As we approached the target the enormous field of flak ahead was unbelievable. And frightening! Our thoughts were ‘Good God! How can anything live through that?’ We all knew how accurate the flak was over Germany. The German gunners had intense radar control.... Boom, Boom, Wham! The heavy crashing noise came from below us. Before we could worry about it, the radio crackled, target ahead, prepare for bombing run”.

A WING AND A PRAYER is a design by Erik von Rossing where you, the player, assume the role of a Commander of a Squadron of B-17 “Flying Fortresses” stationed in England during World War II. In mid-1942, the United States Army Air Forces (USAAF) arrived in Britain equipped with B-17 Heavy Bombers. The B-17 was nicknamed the “Flying Fortress” because of their heavy defensive armament of ten to twelve .50 Caliber machine guns and armor plating in vital locations. Because of their heavier armament and armor, the B-17s tended to carry smaller bomb loads than British bombers. With all of this, USAAF and British Commanders adopted the strategy of taking on the Luftwaffe head on, in larger and larger air raids by mutually defending bombers, flying over Germany, Austria, and France at high altitudes during the daytime. They claimed that by using the B-17 and the highly classified Norden bombsight, the USAAF should be able to carry out “precision bombing” on locations vital to the German war machine, such as factories, naval bases, shipyards, railroad yards, railroad junctions, power plants, steel mills and airfields.

Your Goal is to manage your squadron aircraft and complete a campaign consisting of a series of Daylight Bombing Missions against strategic Axis targets and score as many Victory Points (VP) as possible to assist the Allied war efforts. Campaigns can be Short (12 Missions), Moderate (18 Missions), or Long (24 Missions). To complete your mission it’s going to take A Wing and a Prayer.