Enemy Coast Ahead: The Doolittle Raid 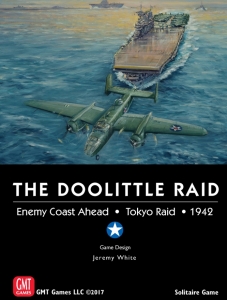 Enemy Coast Ahead: The Doolittle Raid uses the game format to explore this highly dramatic military episode. It is a solitaire game challenging the player to conduct a successful mission where the criteria for success is not purely military. The player must organize, equip, and train a squadron of B-25 medium “Mitchell” bombers to attack a distant and rather dangerous target. The game not only covers the raid from launch to landing, it extends the story on both ends. Threatened from the air and from the sea, the player must do his utmost to strike the Japanese capital, avenging the attack on Pearl Harbor, and then land his aircraft safely. If the raid goes poorly it may boost Japanese morale and deflate the mood in the United States. Getting the B-25s close enough to launch is vital, as is the recovery of aircraft and crewmen, but above all, the player’s main dilemma will be secrecy. The risk is great. Failure could mean the loss of an entire squadron, or worse, the sinking of a precious aircraft carrier. Will the Doolittle Raid add to the dismal news of Pearl Harbor, Guam, Wake Island, and Bataan, or will it signal the turning of the tide?

Much like chapters in a story, the game is organized in six narrative segments, chronologically arranged. Each poses its own set of challenges and prompts decisions that establish the environment and conditions of subsequent chapters.

Segment 1 – Planning: Planning the raid is crucial, and so the game starts in January, 1942 with the mandate of an exasperated President Roosevelt. The first problems are political. Will you be able to persuade Premier Stalin to allow this Special Aviation Project to land in Vladivostok, and if not, will you manage to prepare Chinese landing sites in time?

As January gives way to February, March, and April, other decisions must be made. Landing in China could make for a very long flight, so you may need to modify the bombers to carry more fuel and less weight. What modifications will you make, and how far will you go to lighten the B-25? Will you strive to make a devastating impact on your targets, loading as much ordnance as your aircraft will take, or will you make room for extra fuel? Will you take the opposite tack and arm the B-25 so that it can endure determined attacks from Japanese fighters and anti-aircraft guns?

You need to plan a launch close to Japan – uncomfortably close – will the Navy be prepared to escort your bombers that far? Will you manage to train the squadron to get bombers off the carrier, manage fuel consumption even against adverse weather, find targets, and then find landing sites? Will you train them for a night attack or an attack in daylight? And will you do all this without breaching security?

Many of your crucial decisions involve secrecy. Will you tell the crews they are training to attack Tokyo? It will boost morale, but is it worth the risk? Will you allow wives to stay with crews while they train at Eglin Field in Florida, or perhaps you will quarantine the base and work with the Federal Bureau of Investigation to monitor all contact the crews have? Will you brief Chiang Kai-Shek of all the details of the raid? The more people you brief the more effectively you will prepare a successful mission, but at the risk of leaking information into the wrong hands.

After grappling with all this, your crews fly their birds to the Pacific Coast where they will be hoisted onto the deck of one of the Navy’s aircraft carriers. Bombers can be damaged flying cross-country, especially with young pilots practicing hedgehopping skills, and Navy mechanics have never hoisted medium bombers before. How many serviceable B-25s will you still have when the carrier passes under the Golden Gate Bridge on its journey west? Has secrecy been maintained? Maybe you trained them near Sacramento instead, reducing the risk of damage in transit but perhaps increasing the chance of a breach of secrecy.

The Planning Segment is your chance to design the raid, from launch to recovery, and the decisions you make will establish the conditions of the Naval, Flight, and Attack Segments. Ultimately, your decisions and their outcomes will be assessed at the end of the game when you use the Debriefing Manual.

Besides defending the Doolittle Raiders on the deck of the carrier, and bringing them close to Japan, you will also want to rendezvous with Admiral Halsey’s task force (that is, if you arranged for a rendezvous during planning). If you can’t find Halsey, are you willing to break radio silence? Will you send recon aircraft to look for him? Have you ordered U.S. submarines to assist, or are they lurking off Japan gathering intel? And after rendezvous, will you encounter the enemy before your task force reaches the planned launch point? And if that happens what will you do? Will you call for an emergency launch? Are you close enough to the target? Will the task force manage to escape Japanese waters unscathed, or will it leave behind the hulk of a wrecked ship or two?

Segment 3 – Flight: The Flight segment is triggered once you give the order to launch, or when it is forced upon you. It takes place on a Flight Map. Wind and fuel consumption will be your two primary concerns, although you may be anxious that the Japanese are on to you which will mean your bombers can expect a hot reception over Japan.

If you made good decisions up to now, and luck has not conspired against you, the weather may be to your advantage, and even better, the Japanese may suspect nothing. Have you planned for the worst or were you hoping to skate by on good luck? Mechanical failures and enemy eyes in the form of flying boats and even fishing boats are some of the hazards your flights may encounter. Or worse, Japanese military aircraft.

Segment 4 – Over the Target: After acquiring targets you will play the Attack segment. Have your bombers arrived at their targets during the day, or at night? Attack turns are played on individual target maps, each with their own set of hazards: flak, balloons, fighters, searchlights...or maybe you managed complete surprise and you will face nothing but quiet skies. Will they remain quiet once you start dropping bombs? If you stripped your B-25s down endeavoring to conserve fuel, are they equipped to tangle with a roused adversary? Will the wreckage of American bombers rain down on Tokyo as well as ordnance? The maps are double sided, each depicting the target at night or during the day.

The Flight segment resumes as the B-25s leave their targets and head for landing sites. Fuel is now the main issue (it may have been already – have B-25s already ditched into the Sea of Japan?). Only now the Japanese are on the alert, perhaps in pursuit. (They may have been already.) Will your bombers manage to land or will they ditch? Will crews be captured? Will downed crews in China trek their way to safety and reassignment? Will you deliver a squadron’s worth of B-25’s to General Stilwell, reinforcing the western front of the Pacific Theater, or has this mission squandered valuable machinery and skilled personnel? If they land in Vladivostok, will Stalin order the crews interned, in deference to his neutrality pact with the Empire of Japan?

The game ends with a debriefing segment where the raid is put into political and military context. One by one each stakeholder’s interpretation of the mission is brought into view: the Army, Navy, the Joint Chiefs of Staff, and the White House. Concerned about its relationship with China and the Soviet Union, Roosevelt’s administration is sensitive to the health of its alliances. Will the raid strengthen Chiang’s military position, or weaken it? Will the raid and its aftermath have an influence on Sino-American relations, perhaps even hastening the repeal of the Exclusion Acts? If the raid is a debacle, will Japanese-Americans face retaliation at home? Will Executive Order 9066 be accelerated, perhaps expanded?

Debriefing concludes with an assessment of how the raid was perceived in Japan. Was it significant enough to alarm the high command, precipitating a second crack at Pearl Harbor? Was the mission successful enough to inspire the motive of revenge, prompting an attack on mainland United States? Will Chinese landing sites, and more, be the target of a campaign of vengeance? Will Admiral Yamamoto’s scheme to intercept and destroy the United States carrier fleet at Midway finally be approved? Or was the raid so trivial that Japan can ignore it as it pursues its southern strategy?

Besides play of the full narrative, the game offers a number of historical dissections, each a scenario focusing on a fragment of the raid. They are also a handy way to learn the game, since each scenario uses only part of the rules. For example, Scenario One covers Doolittle’s flight over Tokyo, using only the 8.5x11 Target Map and the Attack Segment. An alternative scenario looks at a night raid by that flight, as Doolittle originally planned it. After playing one or two small scenarios using only the Attack segment’s rules, a larger scenario can be played adding the Flight segment. Graduate next to an even larger scenario that starts with the Naval segment. In this way a player can learn the game in program fashion, little by little, studying the history of the raid by playing it as he learns.

Player Aid Folders: The game comes with several 11” x 17” bi-fold aids allowing the play of each game segment with minimal study of the rule book. The mapsheet is designed to interlock with other game components, including those play aids, in order to make the player’s experience fluid.