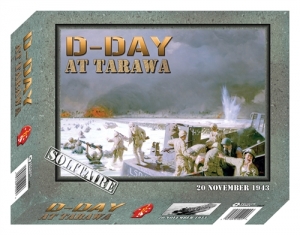 D-Day at Tarawa is a solitaire game simulating the amphibious invasion of Betio Island in the Tarawa Atoll. The US marines assaulting the tiny island, with its strategically vital airstrip, found themselves in their toughest battle of World War II, a fight to the death against 5,000 Japanese defenders.

D-Day at Tarawa advances the solitaire game system of its award-winning predecessor D-Day at Omaha Beach to the next level. You control the US forces against a tenacious Japanese defense. An innovative diceless combat system highlights unknown enemy deployments and the importance of the right weapons and tactics. Event cards keep the action flowing and the rules simple, while introducing extensive historical detail.

The First Waves – can your marines survive the initial landings?

Two Days in Hell – can you secure the island in two days?