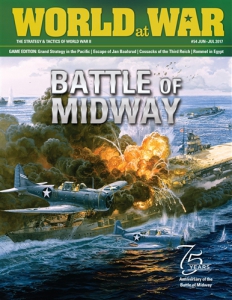 Midway Solitaire is a wargame of the Campaign in the Pacific Theater of Operations (PTO) in April-June 1942. This period saw the Japanese take the offensive in two major campaigns which resulted in the battles of the Coral Sea and Midway, both of which were decided by aircraft carrier actions. In the game, the player takes command of United States Navy and Allied (USN) forces. The game system takes command of Imperial Japanese Navy (IJN) forces. You, as the USN commander, must defeat multiple IJN naval offensives while your foe has superior numbers. What is at stake is the entire course of the war in the Pacific Theater.