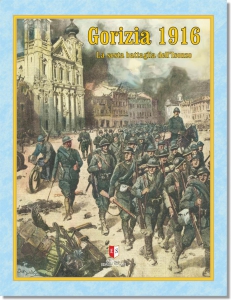 The Sixth Battle of the River Isonzo (August 1916) had been planned for a long time by the Italian High Command. They had learned from the bitter experiences of former fruitless and bloody offensives aimed at forcing a crossing of the Isonzo, and this time were able to achieve complete surprise.

The start of the Battle was delayed by the Austro-Hungarian Spring Offensive (the Strafexpedition) which took place during May – June 1916. This had necessitated the diversion of Italian divisions from the Isonzo to the Province of Trentino.

Ironically, this interruption to their plans worked to the Italians’ advantage. The Austro-Hungarian High Command underestimated the speed with which the Italians were able to re-deploy their troops and guns to the Isonzo theatre and so were unprepared for the carefully planned attack on Gorizia.

This is World War I at its most pitiless and savage...

Gorizia 1916, La sesta battaglia dell'Isonzo, designed by Andrea Brusati, is a low-medium complexity tactical game on the campaign conducted by the Italian forces against Austria, during August 1916.

This is a mini-monster, very playable game with many hundreds of die-cut counters, one 22"x34" map with large hexes representing the theater of the Isonzo River, at a scale of 900m per hex, 1 day per game-turn. Each unit counter represents a battalion, or an artillery battery.

The game system is the same as its predecessor, Strafexpedition 1916?