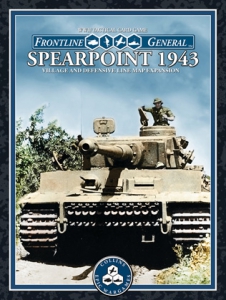 Frontline General: Spearpoint 1943 Village and Defensive Line Map Expansion takes our Spearpoint 1943 WWII tactical card games to a greater level of depth for players who want to take Spearpoint 1943 a bit further. Using the Spearpoint 1943 base game, we focus on battles between US and German forces in Italy during 1943. Once the Eastern Front base game is available, an all-new Scenario book will be released that focuses on battles between German and Russian forces on the Eastern front in 1943. The map expansion provides terrain that can easily be used for each setting. This is not a standalone expansion, and relies on use of the cards and dice of either base set in order to play. The rules of the expansion supercede the rules of each base game when played with the expansion, and provide an entirely diferent feel for the game.

Defensive Line MapStandard and Scenario Game Types will be familiar to players of Spearpoint 1943. Yet the addtion of terrain, line-of-sight, movement, range, and a gritty, realistic immersion factor courtesy of Mark H. Walker's fictional introductions to each linked scenario, make this expansion a game that Spearpoint 1943 players will not want to miss. Many concepts and mechanics (such as combat and deck construction) from Spearpoint 1943 are carried over to the expansion, making the transition to the expansion for Spearpoint players relatively easy.

Another way we facilitate learning the game is through something totally unique to Collins Epic Wargames. We have embedded Quick Response (QR) Codes right into the printed rules set and Quick Reference Card. QR Codes are images that may be scanned by any "Smart Phone" or QR Reader. In addition, you can click the codes while viewing the rules online. Each code links to a video tutorial of a key concept or example, helping you learn the rule or refresh your knowledge of it right from the gaming table. All 17 videos provided by the designer give players a visual and audible way to learn various rules concepts.

CountersCheck out the Learn to Play tab to view the video tutorials. Download the rules, view the Gallery, and check out the FAQ for answers to some frequently-asked questions about this expansion. When you're ready, we hope you'll decide this game is for you, and that you'll enjoy it for many years.