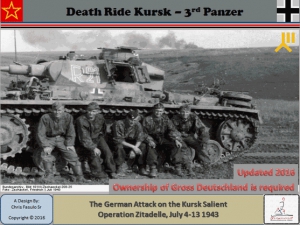 This game, as the base game in the 3 game set, is considerably larger than any of the other games in the series. It has the largest map area with (18) 11x17 sheets and Gross Deutschland has the 10th Panzer Brigade which adds considerable size to the counter count. It also makes for some very exciting fighting.

Besides the map and scenarios the rules have undergone some refinements with additional clarifications and diagrams and some new rules. These new Master Rules (v 2.2) are available for download at the CSW Death Ride Kursk forum. These games include the Command and Control and Fire Support Enhancements which means you don’t need to buy anything else to have detailed command and fire support operations if you want them.

The game system has some unique qualities. Above all the open sequence of play within each players Operations Phase. The game system models the seven Battlefield Operating Systems (BOS) in some detail and this makes play of the game feel very different from other comparable games. During this Operations Phase you can perform Maneuver/Fire, Fire Support, Engineering, Intelligence, in any order you desire to support your plans. During the enemy player turn you have the opportunity to exercise the Air Defense OS, and during other times of the sequence of play you account for Command and Control and Combat Service Support. There is a lot here to digest and if you want to get closest to being involved in a military Command Post Exercise, this is it.

This game is going to give you a completely new appreciation for the struggles of the Gross Deutschland Division during the Citadelle offensive. The attacks timetable was disrupted early on and never got back on track. The division hit the Pena River, bounced back, slid to the right along the southern bank, and then north toward Oboyan. The sheer quantity of troops set against them is daunting to have to try and wear down. But this is the nature of the battle. And the game does a great job of presenting the situation as a real slugging match.

German Units are Platoons and/or Companies

Gross Deutschland was the largest German division involved in the battle and was endowed with an abundance of armor. Unfortunately it was armor (Panthers) that was still too young to work properly and caused everyone lots of headaches. For this reason it is also the largest game in the series. Gross Deutschland had the hardest mission as it moved through the center of the area of operations. Its mission was to spearhead the XLVIII PzK operation and make the main effort up the Oboyan road towards Kursk. The Division has components of all arms and is a very powerful organization, even without the Panther Battalions. It is organized the same as an SS Division. It has a Panzer Regiment with 2 Panzer Battalions (90 MkIII and MkIVs), 2 Panther Battalions (190 Panthers), 2 Panzer Grenadier Regiments each with 3 Infantry Battalions and a Combat Support Battalion, a Panzer Artillery Regiment with 3 Battalions, a Reconnaissance Battalion, PanzerJager Battalion, Anti-Aircraft Battalion, Pionere Battalion, and an Assault Gun Battalion. YOU have the ability to task organize the Division to make each Battalion a more potent combat weapon by cross-attaching infantry to the armor and vice versa, or even engineers or recon to these Battalions.

3 rd Panzer was not the largest German division involved in the battle. 3 rd Panzer’s mission was to be the left flank guard for the XLVIII PzK. It was also responsible to cross the Pena River, which was impossible until GD made the crossing further north on a narrower point of the river. Elements of the 332ID were moved in to 3 rd Panzer’s area in order to allow 3 rd Panzer to close up on GD. One regiment of 332ID holds the southern bank of the river for most of the battle. The Division has components of all arms and is an average strength panzer division at this time in the war. It is organized the same as most panzer divisions. It has a Panzer Regiment with 1 Panzer Battalion, 2 Panzer Grenadier Regiments each with 2 Infantry Battalions, a Panzer Artillery Regiment with 3 Battalions, a Reconnaissance Battalion, PanzerJager Battalion, Anti-Aircraft Battalion, and Pionere Battalion. YOU have the ability to task organize the Division to make each Battalion a more potent combat weapon by cross-attaching infantry to the armor and vice versa, or even engineers or recon to these Battalions. Although the panzer regiment has only 1 battalion it has an organization with companies that 22 tanks each instead of the normal 17. This helps boost the divisions’ armored component to near around 80 tanks. It also has 4 companies versus the standard 3 companies.

(4) Map Sections of the Pena River Area of Operations

Gross Deutschland - Base Game - comes with (in Full Color):

(18) Map Sections of the Pena River Area of Operations

128 Pg. Master Rules Version 2.2, Which Base is from the IISS Games, now including more diagrams and examples

Command and Control Enhancement Built In