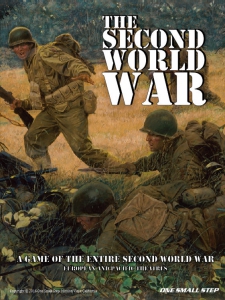 The Second World War is a grand-strategic, historical simulation game about World War II. Players represent the major powers involved in the conflict and have at their command the forces with which to wage war and achieve victory for their country or alliance.

The game covers the European, North African, and Pacific Theaters on three maps and four counter-sheets.

The Second World War was prototyped by Peter Bertram and Randall Mac Innis in 1985. It was originally envisioned as a medium-complexity wargame to fall somewhere between the existing designs, Axis and Allies and World in Flames, which were either too pedestrian for us hard-core, grognard wargamers or too massive to be played within the confines of our housing. This final version is exactly what we envisioned when we started: a fun game about WWII with a lot of meat, but not so complicated that you need to be an accountant to enjoy it.

The game scale, the 3-map composition, and the use of megahexes to regulate naval movement were originally set by Peter and Randall. They are the only elements that remained intact throughout development. While designer John D. Powers had to make many trade-offs between realism and playability, the latter was the primary concern. Once the nuances of the system are understood and exploited by all players, you will find that historical strategies will yield surprisingly historical results.

I hope that players find it to be enjoyable, and despite its high-level, granular view, the most accurate grand strategic game about WWII yet to be published.