No Retreat: The Russian Front Reprint 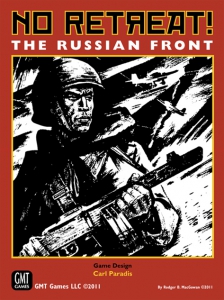 No Retreat: The Russian Front is a new deluxe edition of designer Carl Paradis' two-player wargame that retells the story of the titanic struggle between the invading armies of Nazi Germany versus Communist Russia during WW2 at a player-friendly and manageable level of scope and difficulty. This edition combines both the original game and its two extensions (Na Berlin ! and No Surrender!) using deluxe components of “Twillight Struggle Deluxe Edition” quality. With only 50 Army/Front sized counters for the Tournament game, and 70 for the whole campaign, and with very low stacking, it’s a quick-playing yet realistic affair that favours the strategic and offensive-minded player.

Each turn is alight with intriguing on-board challenges plus the surprise of card hand Events as players vie to win in one of three different ways.

It is a skillfully blended collation of classic hex-based wargaming and modern card-driven simulations, No Retreat: The Russian Front stays truly story-centric, providing the proper feel of sweeping maneuvers, exploitation and encirclements across the vast steppes and forests of Russia . With a simple-yet-innovative economic model, players will also feel the growing might and sophistication of the Russian’s Red Army, and the degradation of the once-invincible German Wehrmacht, over the epic four year sweep of time that this merciless campaign was fought.

Neither side can afford the disgrace of yielding an inch of ground to their hated foe, so your orders are: “No Retreat!”

The initial assault on the Soviet Union , last for 5 turns.Can the Germans take Leningrad and Mocow before “general winter” freezes the German war machine dead in its tracks?

4 Turns. The Offensive towards the Caucasus Oil Fields, and the Nazis disastrous rendez-vous with destiny at Stalingrad . Or… Maybe the OKH will decided to strike north again at the Russian Capital?

4 Turns, With their hated foe stuck in Stalingrad , the Russians will make them pay for the last 2 years of suffering. Now is the time to attack! Hourre Poebdia!

Hitler’s last chance at getting a “victory” of sorts in the East after last winter disaster in the south. 4 turns. It’s a do-or-die proposition for the Germans, as not the red Army can fight on an equal terms. Will Kursk be the tombstone of the Panzers?

4 Turns. The Soviet summer offensive that finally broke the back of the Wehrmacht, and made the Normandy landings look like a mere scuffle. Will you repulse the hated foe from his last Mother Russia’s foothold?

6 Turns. This scenario sees the final collapse of the thousand-year Reich. Or maybe the reinforcement from the West, the Volkssturm, and Hitler’s “Hold at All Costs” orders can somehow stave defeat? This will be no cakewalk for Stalin’s soldiers.

The original NR! game in a Tournament format, with fixed weather and a smaller map. You can replay the whole WW2 campaign in Russia in one long evening.