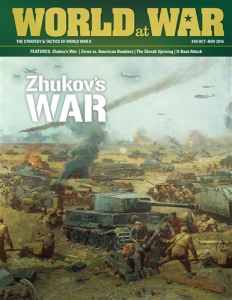 Zhukov’s War covers the pivotal middle period of the titanic struggle between Hitler's Germany and Stalin's USSR, from July 1942 - July 1943. Strategic options abound for both players; victory goes to the one best able to carry out the chosen strategy, while maintaining a reserve to contain sudden enemy action or exploit an opportunity. The map covers the eastern front from Leningrad to the Sea of Azov at 20 miles per hex. Turns cover one month each for most of the year, two months during winter. Most units are Soviet armies and German divisions, plus a few Axis satellite corps. The turn sequence is built around the random drawing of chits to determine which player moves. Each chit drawn allows a player to both move and attack, but with a twist. One side allows the player to move first, then attack, the other side flips the sequence. There are two twists to the mechanism. First, chits come in several varieties, with differing penalties or bonuses depending on the chit and the side chosen. Second, during certain turns, one player or the other gets bonuses, allowing selection of the first chit to open the action, and providing a different mix of chits reflecting the overall situation at that point in the war. Victory may occur at one of three times during the game; the end of the first German offensive, the end of the Soviet winter counteroffensive, and finally the end of the game, after the final German summer offensive.