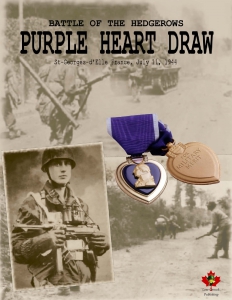 Chapter PHD that includes rules to play the Campaign Game

St-Georges-d’Elle France, 11 July 1944: The morning was chilly and a mist had settled over the slopes of Hill 192, for the men of Company A, 1st Battalion, US 23d Infantry Regiment this weather would mean that the planned air support for the attack would be cancelled. Stepping off just after 6:00 a.m., Company A crossed its line of departure, the road that ran west out of St-Georges-d’Elle. Some 200 to 400 yards from its line of departure was a long, steep gully that ran 750 yards east to west along the battalion's front, called “Purple Heart Draw”. Company A did not meet stiff opposition until it reached Purple Heart Draw, then a murderous fire came from automatic weapons emplaced in houses along the road south from St-Georges-d’Elle and from the south bank of the draw...

St-Georges-d’Elle France, 11 July 1944: Company A was being pinned down by heavy mortar and artillery fire in Purple Heart Draw; Company C, to its right had moved forward against lesser difficulties thanks in part to the assistance of the engineers of the US 2d Combat Engineer Battalion, who blasted gaping holes in the thick sides of the hedgerows for the support tanks of the 741st Tank Battalion to pass through. The men of Company C quickly followed up and by mid-morning had closed on the small chateau, which seemed heavily fortified and bristling with German machine-guns...

St-Georges-d’Elle France, 11 July 1944: By late morning, the 1st Battalion, US 23d Infantry Regiment was finally able to cross Purple Heart Draw, but had suffered heavy casualties. Meanwhile on the east side of St-Georges-d'Elle, the Germans still held the lower end of Purple Heart Draw. It was decided that in an effort to draw off any Germans from reinforcing their position in front of the 1st Battalion’s main effort, the 3d Battalion, US 23d Infantry Regiment would launch a series of diversionary attacks. Company L, US 23d Infantry Regiment started forward, tasked with the clearance of the eastern half of St-Georges-d'Elle, but no sooner had it cleared the last hedgerow just north of the town, when it too came under heavy fire...

St-Georges-d’Elle France, 11 July 1944: Through out the day, the drive of the 1st Battalion, US 23d Infantry Regiment, while it had been slowed by stubborn resistance, had packed too much power for the Germans, who fought to hold Hill 192 and their lines near St-Georges-d'Elle. The Germans, in a last desperate attempt to halt the US advance, were forced to commit Fallschirm Sturmgeschütz-Brigade 12, Fallschirm Aufklärungs-Kompanie 3, and their last reserves, Fallschirm Pionerie-Abteilung 3, in a last ditch counterattack north along the heavily-treed road towards St-Georges-d'Elle in the hopes of catching the Americans off-guard..