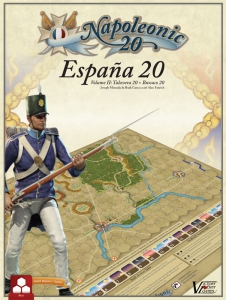 Rudi Garcia's Talavera 20 recreates the major battle which occurred near the city of Talavera de la Reina on 27 to 28 July 1809. One player commands the French army under Napoleon's brother, Joseph, the self-proclaimed King of Spain, and the other commands the combined allied armies of Great Britain (under Sir Arthur Wellesley) and Spain (under Captain-General Gregorio de la Cuesta). After his attempt to liberate Madrid from the French was repulsed, Cuesta's army fell back to Talavera, which was covered by the British. Starting with a daring night attack, Joseph repeatedly attempted to push the allies out of their superb defensive positions, to no avail. As the French, can you find and exploit a weak spot in the allied lines? As the allies, can you hold your shaky alliance together and fend off the French (all the while keeping a nervous eye out for a second French army that might unexpectedly show up behind your armies)?

Bussaco 20: Second Edition, from designer Lance McMillan, features the battle occurring on 26 September 1810, during the early stages of the French invasion of Portugal. One player commands the French army of Marshal André Masséna, while the other controls Sir Arthur Wellesley, Viscount of Wellington's combined British and reconstituted Portuguese army. Historically, a distracted Masséna launched a series of uncoordinated frontal assaults straight up a steep ridge into the teeth of the British defenses, suffering heavy losses before Wellington elected to disengage and fall back to Lisbon. Can you as Masséna avoid the same mistakes, or as Wellington can you use your superior position to achieve a decisive victory?