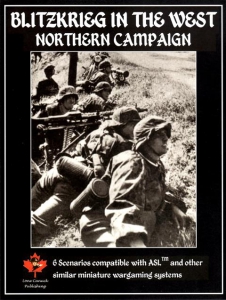 This six-scenario pack revolves around battles of the German invasion of Fortress Holland and is compatible with MMP's ASL™ System and modifiable to be used with other miniature Wargaming systems.

Blitzkrieg in the West - Northern Campaign' scenarios can be played separately, or the six scenarios may be linked together to form a campaign game by playing each scenario in order. At the conclusion of each scenario, both sides total up their Victory Points (VP); and at the end of the last scenario these VP are totalled, and the side with most VP wins.

Blitzkrieg in the West - Northern Campaign

BWN-1 Their Baptism of Fire: SS-Germans vs. Dutch, 10 May 1940, 8 Turns, 2 Boards; just before dawn, units of SS-Standarte Der Fuhrer Regiment attack the Dutch border-crossing site on the Maas-Wall Canal, heralding the launch of Germany's Blitzkrieg in the West.

BWN-2 The Veluwe: SS-Germans vs. Dutch, 11 May 1940, 7½ Turns, 2 Boards; in the early hours of the German attack, the Dutch were able to destroy several bridges; despite this set back, reconnaissance units of the SS-Leibstandarte Regiment managed cross a damaged bridge and were soon racing west into the forest area known as the Veluwe; there they would meet up with Dutch 5th Hussars.

BWN-3 Schweiss Spart Blut: SS-Germans vs. Dutch, 11 May 1940, 6 Turns, 4 Boards; one objective that crucial to both the Dutch and the Germans plans was the Grebbeberg; a 54m high hill dominating the ground west of Rhenen. It was the lynch pin to the Grebbeline, the task taking this formidable strongpoint was given to the SS-Der Fuhrer Regiment.

BWN-4 Brush at Tilburg: Germans vs. French, 12 May 1940, 7½ Turns, 2 Boards; the German Fallschirmjägers had seized the Moerdijk Bridge, blocking the on rushing French 7th Army from linking up with the Dutch near Rotterdam. The French then turn east to met the advancing Germans, its lead reconnaissance units first making contact with the 9.Panzerdivison near the town of Tilburg.

BWN-5 Breda Bash: Germans vs. French, 12 May 1940, 7½ Turns, 2 Boards; the French 7th Army raced north, making the 265km journey with little interference from the Luftwaffe. As the lead elements of the French reach the area near Breda, it immediately deployed to do battle with the Germans.

BWN-6 Raid on Moerdijk: Germans vs. French & Dutch, 13 May 1940, 7½ Turns, 5 Boards; when the French forces arrived in Holland, the Dutch pre-war dreams had to come true. Finally, the French would be able to assist them in kicking some German ass.