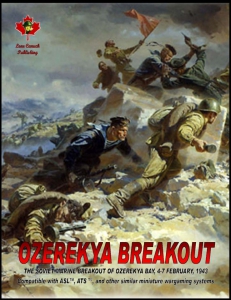 Ozerekya Breakout offers players the unique challenge of fighting a medium-unit action in the Ozerekya River valley, south of the Black Sea town of Glebovka, Russia and is a must-have for any wargame collection.

One colour 24”x 33” historical Map of the river valley south of Glebovka,

Chapter OzB that includes rules to play the Campaign Game

Glebovka, Russia, 4 February 1943: In the early morning hours, Soviet seaborne forces landed on the peninsula along the west side of the Ozerekya Bay. These forces were led by tank spearheads and quickly advanced towards Glebovka, where they came across a Romanian Mortar position set up in the vineyard of an old manor....

Glebovka, Russia, 4 February 1943: In the early morning hours of 4 February, Soviet seaborne forces landed on the peninsula along the west side of the Ozerekya Bay. The Soviet forces were led by tank spearheads of the American built Stuart tanks of the 563rd Tank Brigade...

Glebovka, Russia, 5 February 1943: By the late afternoon, this force threatened to capture the Axis held town of Glebovka. In desperation, the Romanians, in an attempt to slow the Russians’ advance, threw whatever units they had on hand. The Engineers of the 58th Battalion located in nearby Krasno Medvedovskaya and the freshly arriving German panzerjägers of the Panzerjäger Abteilung 173 were quickly rushed into battle...

Glebovka, Russia, 6 February 1943: Despite having three barges, four launches, two steiners, one tug, and one patrol boat sunk; and sixteen patrol boats, two tugs and two launches damaged; the Soviets were able to get 1,427 men and 10 tanks ashore before dawn. On the other hand, the landing force had no radio communication with the fleet...