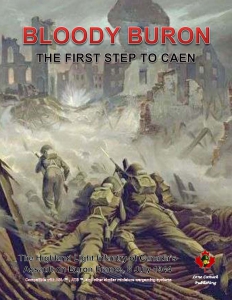 Bloody Buron, offers players the unique challenge of attacking a prepared defensive position, set up guarding the Norman village of Buron, Northwest of Caen, France; a must have for any wargame collection.

One colour 24”x 30” historical Map of the Norman countryside northwest of Caen,

Chapter BB that includes rules to play the Campaign Game

Buron, France, 8 July 1944: Operation Charnwood opened at 0730-hrs, but the 59th British Division was still struggling to win its initial objectives of Galmanche, La Bijude, and St. Contest. Once more Buron would be attacked by the Canadians with St. Contest still in the hands of the fanatical 12th SS- “Hitler Youth” Division under the leadership of Kurt “Panzer” Meyer. For the Highland Light Infantry, raised in Waterloo County, Ontario, this fight was to be their first major battle...

Buron, France, 8 July 1944: On the right flank, D Company, came under heavy mortar, artillery, and machine-gun fire as it assaulted the anti-tank ditch and the positions immediately behind it. The fighting was heavy and close-in, numerous times D Company was pinned to the ground by the intensive fire, only to get up and continue its advance went it let up, or was quelled by the Sherbrooke’s tanks, called up to aid them...

Buron, France, 8 July 1944: On the left flank, B Company, had orders to clear the eastern half of the village. Closing up with the anti-tank ditch, it began to encounter heavy opposition from not only the ditch, but positions directly behind it. In the face of heavy fire, B Company again and again charged the entrenched Hitler Youth, who were equipped with large numbers of automatic weapons. When unable to advance further, due to intense fire, the Sherbrooke’s tanks were called up, but communications started to go haywire...

Buron, France, 8 July 1944: The Highland’s B Company fought to secure the western half of the town, while D Company struggle to secure the eastern half; and by late morning, both lead companies had suffered heavy casualties, but had managed to gain a foothold in the village. C Company then moved forward between the two-lead assault companies, assaulting the village and pressing the Canadians' attack...