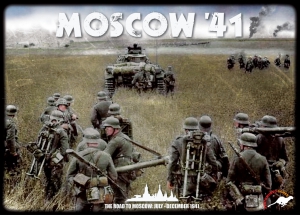 MOSCOW '41 is a light/medium wargame covering the German Army Group Centre offensive aimed to seize Moscow, after having successfully defeated several Soviet armies in the great encirclement battles at the frontier and established two bridgeheads on the Dnieper.

Although based on a historical event, the two players can modify the course of the operations, with the Germans trying to achieve a decisive victory before the winter comes, and the Soviets playing a fighting withdrawal, until ready to strike a decisive blow at the invaders.

The game is recommended for two players, but has excellent solitaire suitability.

"At the beginning of each campaign, one pushes a door into a dark, unseen room. One can never know what is hiding inside."

In December of 1940, Hitler made the decision to invade Russia and set the date for the middle of 1941. He had good reason to be confident that Russia would collapse under an uncompromising assault. Since the outbreak of hostilities, the German Wehrmacht had accomplished a stunning and unparalleled series of victories: Poland had fallen in one month, Denmark in one day; France, till then regarded as the strongest power in Europe, had capitulated in under six weeks, Holland in under six days; Belgium, Norway, Yugoslavia and Greece took less than three weeks each. The German military might was at its peak and the word Blitzkrieg had entered the language.

Russia, on the other hand had taken over three months to bring Finland to heel, despite overwhelming strength of numbers. The Russian army had not yet recovered from Stalin's purges of 1937-1938 where 400 generals were “removed” including three field marshals and 13 Army commanders. It was well that Hitler could say, “Before three months have passed, we shall witness a collapse in Russia, the like of which has never been seen in history. We have only to kick in the front door and the whole rotten Russian edifice will come tumbling down.”

Initially, the operation succeeded beyond Hitler's wildest dreams. Within a day, the Russian Air Force was destroyed on the ground, then vast inroads were made on all fronts accompanied by large scale surrenders of encircled Russian troops. Army Group Centre with its four armies consisting of a total of 48 Divisions, of which nine were armoured, and backed by the Second Air Fleet, had reached the outskirts of Smolensk by the 15th July. This was two-thirds of the way to Moscow and it seemed that nothing could stop von Bock from blowing up the Kremlin within another three or four weeks... or could something stand in his way?

Four things could now cause problems to von Bock: firstly, his supply line is stretched and had almost reached breaking point; secondly, Russian resistance is stiffening; thirdly, his infantry divisions are having difficulty keeping up with the Panzers and finally, a new Russian ally is about to enter the field: General Winter.

Additional concerns may come in November, with three-quarters of a million experienced Siberian veterans freed by garrisoning Soviet Far East, thanks to Stalin's spies in Tokyo revealing Japanese intentions to attack America, and not Russia.

As the German Commander, you must push on to Moscow before it is too late. As the Russian Commander you must re-evoke the Patriotic War and stop the invaders at any cost