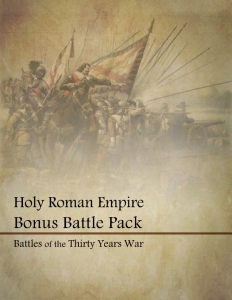 Holy Roman Empire is a strategic game, and while conflict is normally resolved abstractly by the throw of some dice, an Optional Tactical Combat system is included for those players seeking to add a bit more flavor to the game. This game-within-the-game system can also be used to re-fight some of the great battles of the Thirty Years War. The 12 scenarios included in this pack are not in-depth simulations of those epic contests; they are instead a collection of quick mini-games that are meant to allow players a glimpse into the way battles of that era were fought. As in any war, not every battle is an even contest; some are puzzles where players take turns commanding each army to see which of them can do better as the disadvantaged side--or through luck and skill turn an historic defeat into a surprising victory.

The 12 battles in this pack are presented in chronological order, and if fought in that order will give players a brief running history of the war. Contestants may choose to play the games in any order, may select favorite battles to re-fight or may make a campaign by taking each battle in turn, with one player always taking the Imperial side in each contest and then tallying the results of each battle to reach a final score of wins and losses.

Players resolve the battles in this booklet utilizing the Optional Tactical Combat systems as found in the Holy Roman Empire game. Additional options for "Create Your Own" Battle scenarios are also included in those rules.

NOTE: A copy of Holy Roman Empire board game is required to make use of this expansion book.

Includes one 32 page fully illustrated book and one half sheet of counters containing additional markers and a small number of errata counters for the basic game.