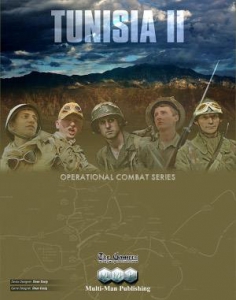 Tunisia II is an Operational Combat Series game covering the campaign in Northwest Africa from November 1942 through May 1943. This new edition is similar to the original game from 1995, but features a revised order of battle, modified rules, and new maps. We are really happy to get this classic design updated and back in print! The tempo of play is just outstanding, beginning with just a few units in play. Over the next few months both sides rapidly reinforce the theater. The build-up culminates with Rommel’s offensive at Kasserine and tension over the variable entry of Montgomery’s 8th Army. This climax is followed by the slow destruction of Axis forces in North Africa.

The upgrade of this game involved a handful of important decisions. A straight reprint was out of the question, since the original was designed back when the OCS v2 rulebook was fairly new. In Tunisia II we standardize how the game should be played with the latest series rules, and also have updated it to “fit” better with newer OCS games. So units and rules have been changed to conform to games also set in 1942-43: DAK II, Case Blue, and Sicily II. Recent work on Beyond the Rhine is also factored in.

Here are some of the game’s highlights:

Revised counters: The research of Paul Dallas, supplemented by that of Dean Essig and Roland Leblanc (who did a comprehensive check using recent publications) has led to a revised counter mix that better reflects current OCS concepts.

Italians: Some small units were consolidated due to my belief that fewer counters would lead to a better simulation (by reducing the number of “shell catchers” available).

Germans: The Luftwaffe order of battle is much more precise now—many of the air units begin reduced, for example, to account for their low numbers. Increased attention has also been paid to modeling the weakened condition of the Afrika Korps.

French: The French in the game were in the midst of a transformation. Just a week before our game began these units were fighting the Allies; now they are fighting the Germans. Morale and equipment were spotty,and to reflect this we’ve dropped their ARs.

Americans: Several US tank units are included that did not actually fight in the campaign (they were held back in Algeria and Morocco). They are limited to operations in Algeria, acting as are sort of an insurance policy against disaster.

Commonwealth: The Commonwealth’s corps-level guns are clumped into abstract groups, as part of a general decision to consolidate the small stuff. British 5th Corps, for instance, included six small artillery regiments that are shown by three counters: 1 FA, 5 FA, and 5 M. The handling of anti-tank units posed a similar issue. Some divisions have “red” arty units—this is to show these divisions have a towed anti-tank battalion. Normally, the only AT units with actual counters are things like the German 88s and American tank destroyers. This works well overall, but the Commonwealth seemed to be really short-changed by this design approach. So now they have some abstract AT units—one per FA group. There are enough of them to be useful, but not so many as to require another counter sheet.