Accueil > Livres > Decision Games > With Custer At The Death 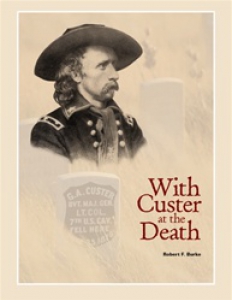 The fascination with Custer's Last Stand hasn't diminished in the decades since 1876. He led his regiment well ahead of the main body, only to run into an unprecedented gathering of Indians. The first accounts were pieced together by other soldiers arriving on the scene in the battle's aftermath, and by archaeologists in the generations since. To that information was added the reminiscences of the Indians who fought there.

Interleaving and cross-referencing all those accounts provides a minute-by-minute story of the fighting, as Custer desperately and expertly maneuvered his outnumbered troops to face repeated and well-coordinated assaults by bands of Indian warriors. The resultant narrative is supported by dozens of detailed maps and orders of battle for both sides.

This book is the final work of the late Robert F. Burke, who previously had authored meticulously researched articles on the Texas Revolution and the Alamo.