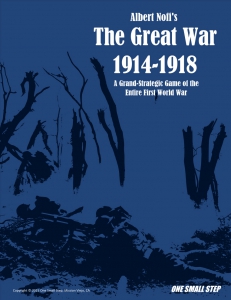 Nothing in history ever quite resembled the nature of the Great War. To be sure , certain events in the American Civil War, such as the trench lines at Petersburg, had presaged the course of military tactics over the next half-century. And even earlier, there were the innumerable sieges of Europe which greatly resembled it. But these were short, at least in relative terms, and confined to small spaces. In World War I, the siege-lines extended across continents, the duration became interminable , and the will to win , or at least resist, became greater almost with each passing day. The net result of all of this is that this war is not ideally suited to the traditional methods of Simulation Gaming. So for Great War a unique Game System has been evolved.

The Great War is a strategic level, area movement system simulation of the First World War. It is a reprint of the game originally published by Rand. On a map of Europe as it was in 1914, divided into a number of distinct geo-political areas, the Players maneuver Armies, Corps, Naval Squadrons and other types of units; engage in mobilization, Combat and diplomacy; and attempt to meet their victory conditions. Great War includes seven regular and one hypothetical Situation Games, plus a Campaign Game which links all of these into one 72-turn or longer game. The game may be played by from two to seven Players and comes complete with both basic and optional rules.

1 x Sheet of Charts and Tables