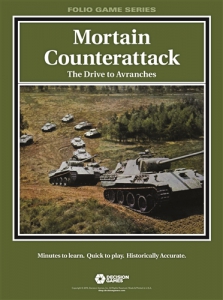 Mortain Counterattack: The Drive to Avranches

The Normandy beachhead was broken wide open by the US drive south through Avranches, followed by rapid advances into Brittany and central France. The operation, however, hung on a slender thread: the lone supply line for the breakout ran through Avranches. Hitler and his generals recognized the weakness; the generals thought the German army in Normandy lacked the strength to take Avranches, but Hitler ordered the attack. Four panzer divisions were gathered near the ancient village of Mortain, intending to take the town and the nearby Hill 317 before driving west. In their way stood the US 30th Infantry Division. The Germans needed a rapid breakthrough, while the Americans had to buy time for reinforcements to arrive.

Mortain Counterattack uses the Fire & Movement system designed around the realities of mechanized warfare, giving motorized and/or specially-trained units clear advantages. Players can augment units at the instant of combat with support fire, provided by weapons ranging from mortars through cannon and light ground attack aircraft to heavy bombers. A seemingly predictable assault can be overturned at the last minute by heavy defending fires, while even small units may develop tremendous offensive punch with the assistance of a heavy bombardment. Winning the battle is a matter of maneuver, firepower and asset management.

• One Standard Rules booklet for this series

• One Exclusive Rules booklet for this title