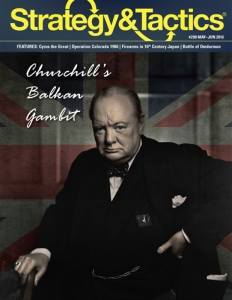 Balkan Gambit is a wargame exploring the alternative-historical premise that the Allied powers have chosen to invade southern Europe via Greece, Albania, and Yugoslavia in the latter half of World War II. Nothing like this actually happened, though the Allies went to great lengths to convince the Axis powers that such plans were intended in order to mislead them as to their true intentions. Some Allied strategists and leaders, including Winston Churchill, believed that an invasion of Europe via the Balkans was a legitimate and war-winning activity.

Each hex on the map equals about 20 miles. Each game turn represents 2-5 days, depending on the scenario chosen and the weather currently in effect. Every ground unit represents a division, division-equivalent, or brigade of about 5,000 to 20,000 men and/or 50 to 350 armored fighting vehicles.