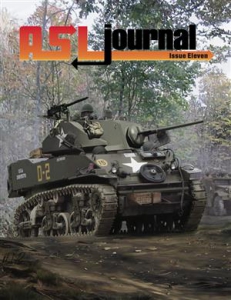 ASL JOURNAL 11 is a 60-page magazine for Advanced Squad Leader and features ten articles, the latest Q&A/errata, twenty-five ASL scenarios (including one Deluxe, one Operation Veritable, one Festung Budapest, and two Valor Of The Guards scenarios), and three Squad Bleeder scenarios (and their associated purchase charts), all printed on cardstock.

The Halfling Aaron Cleavin details why you are probably not Deploying often enough.

Squad Bleeder III is Bret Hildebran's next installment of the ASLOK "fog of war" tournament scenarios.

Getting To Know Gavutu-Tanambogo Jon Neall takes you on a tour of this exotic island destination.

Rivers To The Reich Jim Stahler celebrates the last of the Squad Leader scenario conversions.

The Vierville-sur-Mer Boat Club Chas Argent wants YOU to reach the beach in scenario AP101 When I Call Roll.

Debrief This issue's errata updates, and details about the scenario updates for the new edition of YANKS.

The JOURNAL 11 ASL scenarios require the following boards and overlays: