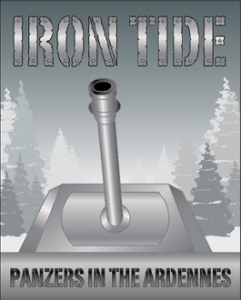 December 16, 1944 — The Battle of the Bulge — Combat-honed panzer units led veterans and conscripts forward against a quiet sector of the Allied lines where untried and batle-depleted units were sent to turn recruits into soldiers. Scattered, over-extended, and out-gunned units held on, fighting desperately as reinforcements rushed into the frantic battle against the onoming IRON TIDE.

IRON TIDE: Panzers in the Ardennes uses a strength chit-draw mechanic to depict the uncertainties of training, combat, and the for of war. Battalions have set combat values, but regiments and brigades derive their combat strengths from chits that reflect the probable range of effectiveness of troops with a given level of training and equipment. Combined arms, artillery, aircraft, and the power of armor all weigh heavilty in the scales of battle.