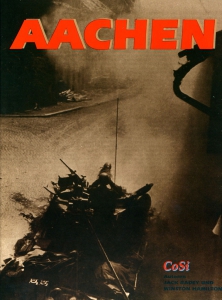 Aachen is a simulation/game depicting the battle for the city of Aachen from September 12 through October 21, 1944.

The struggle between the US 1st Army's VII and XIX Corps is presented on a scale of 1/2 mile (800 m.) per hexagon and company/battalion sized units, with a time frame of one turn (containing 5-6 impulses) per day. The problems posed by the game for the Americans is how to penetrate a double belt of fortifications and capture a large city while at the same time minimizing losses. The German player must use the advantage of good defensive terrain to get the maximum effect out of his poor quality troops so as to slow the US Army's advance until powerful reinforcements can arrive.

Both sides will have to attack and defend with seemingly inadequate resources.