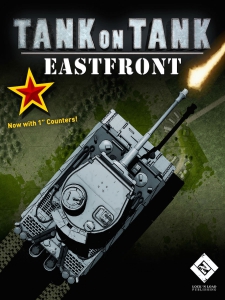 New in Tank on Tank: East Front are rules for improved positions, armored infantry, airstrikes, and the massed activation of Soviet units. Now you can experience the tactical flavor of World War II tank battles with a game that that can be learned in a few minutes and played during a lunch break.

Tank on Tank: East Front is a tactical game on the light side.

The units? Tank on Tank: East Front includes T-34s, KV/85s, Tigers, Panthers, Mark IVs, Turan IIs, as well as the infantry and anti-tank guns that fought alongside them, all presented on gigantic one-inch counters — no more squinting!

If you’ve been looking for a simple game to try your leadership abilities, or something to introduce a young commander to war gaming, Tank on Tank: East Front is the answer for you.