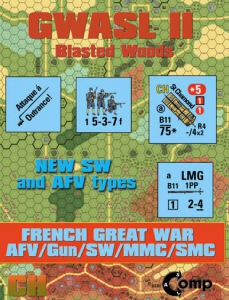 BOIS DES CAURES, VERDUN, FRANCE, 21 February 1916: Lieutenant Colonel Emile Driant foresaw a German assault on Verdun, and made himself unpopular in military circles with his gloomy forecasts, He was a prophet of his own doom. Driant’s two battalions of Chasseurs-a-pied, the elite of 72nd Division, held two miles of wooded hills directly in the path of the main German onslaught. On 21 February, Driant’s infantry were awoken by the greatest barrage ever heard. Every caliber from field gun to the terrible 210mm crashed down, lifted long enough for the stunned Frenchmen to rise to the surface, then began all over again. By midday, 80,000 heavy shells had fallen in an area of barely half a square mile. ‘Frees were blasted to matchwood; platoon-sized bunkers had simply vanished; many Frenchmen were buried alive not once but repeatedly. Nevertheless, as the German assault teams advanced to infiltrate the French lines, almost half of Driant’s men had survived. Isolated, unsupported, blown out of their own fortifications, the Chasseurs fought on.

Prior to his unexpected passing designer and author Ian Daglish (dec.) sent in his GWASL module materials, joining the work of other CH designers in the effort to bring another era of warfare to the collection. Losing top men is sad, and they can never, ever be replaced. But their contributions, like authors of yore, can speak to us, and we are grateful to have this chance to make the Great War return for an encore ... on your gaming table. It is all very straightforward, and the Special Rules give you the handbook you need to maneuver the men and machines, some representing combat systems never seen before, but prominent since. The Chauchet LMG, new French soldiers, Attack a' Outrance rules and couinters, French tanks and Guns, and more! You receive a full sheet of French MMC/SMC/SW, and another sheet of French AFVs/Guns/Vehicles. Special rules in color, 3-hole format. And of course, a collection of color format scenarios (8 in all) that all feature German/French combat.

You know how this works. Support GWASL 2: Blasted Woods and you'll see Russian, American, Turkish, special ANZAC ... and more ... combatants in action in their own modules. GWASL modules also feature a carstock color folder style wrap. You came out of your trenches and were there for GWASL: 1 and now it's time to ... fix bayonets and get ... over ... the ... top for GWASL: 2!

ALL GEO BOARDS USED IN GWASL 2 ARE PROVIDED > no old boards needed nor used! All new means all fresh and all interesting ... and each new geo board is an interesting terrain challenge to solve. A pile of new boards, counters, rules, wow!

>> All the Geo Boards needed to play!

>> A collection of 8 scenarios in color format