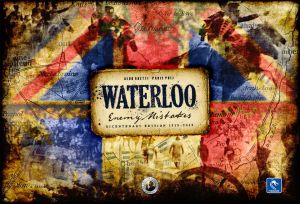 From the producing team that brought you Letters from Whitechapel™ and Kingsport Festival™ a brand new board game for the 200th Anniversary of the Battle of Waterloo (18 June 1815).

Waterloo: Enemy Mistakes™ is a strategic game about the immense last battle of Napoleon Bonaparte that forever changed the destiny of modern Europe, for 2/3 players, from 13 years old and over, for an average time of 150 minutes.

Waterloo: Enemy Mistakes™ recreates, on the occasion the bicentenary of the battle, the clash between the British line-up, helped along by the Prussian army, and the French one.

The players identify themselves with the Commanders of the armies: in two players one leads the Duke of Wellington, in opposition to Napoleon Bonaparte. To complete the main scenery there will be, eventually, a third player in representation of the fieldmarshal Gebhard Leberecht von Blücher, leader of the Prussian.

Waterloo: Enemy Mistakes™ allows the players to recreate or subvert the history of the important military fact that took place the 18th June 1815.

Waterloo: Enemy Mistakes™ was developed by the authors in a decade to allow players to make important decisions (like giving orders, activate units, maneuver them and support them during ongoing attack to make them even more effective) without having to worry about small tactical matters.

In Waterloo: Enemy Mistakes™ players fight an immense battle: 3 Commanders in Chief give instructions to the 14 Generals, who leads 141 Units (corps of artillery, foot soldiers and cavalries) on the big battlefield. The game uses a die as a random factor, but the focus of the gameplay emphasizes above all the elements that characterize the commands and the decisions the players have to do.