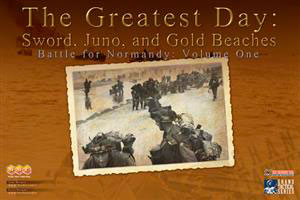 "The Greatest Day: Sword, Juno, and Gold" is the first volume in a three volume series covering the battle of Normandy in June of 1944. It not only introduces a new theater but also provides version 2.0 updates for the GTS rules. Assaults have been streamlined, the artillery rules have been improved, and various other changes have been made to make this version of GTS an even better gaming experience.

A Summary Rulebook for easy reference

A Turn Record and Weather Chart

Introductory Scenarios (all on one map or less with playing times of less than 5 hours):

"Storming Gold": the first few hours of the assault on Gold Beach

"Storming Juno": the first few hours of the assault on Juno Beach

"Storming Sword": the first few hours of the assault on Sword Beach

"To the Sea": the 21st Pz Division’s late afternoon attack on June 6

"Day of the Tiger": the German counter-attack at Villers-Bocage on June 13

"On to Bayeux": the Pz Lehr’s major attack on the 50th infantry Division on June 9

"Day of Days": the first day of the 6th Airborne’s drop into Normandy

"The Race for Caen": the first day from Sword Beach to Caen

"O Canada": the first few two days of the Canadian assault at Juno Beach and beyond

"The Bloody Battle of Tilly": the struggle for the Tilly line from June 11 to June 12

"Nemesis": Canadians and the 12th SS Division in a bitter fight from June 6 to June 9

"The Right Hook": from the landing at Gold Beach to the battle of Villers-Bocage – the action on the right flank of the Allies

"The Initial Plan": from the landing of the 6th Airborne in the Orne Bridgehead to the outskirts of Caen on June 9th

"Operation Perch": the attempt to flank the German position at Caen

Campaign Scenarios (all the maps; playing time of 20-150 hours)

"One Great Day": the campaign game but only on the first day – but it was quite a day

"The Greatest Day: Sword, Juno, and Gold Beaches": from the parachute landings on the morning of June 6th to the evening of June 13th – the entire game