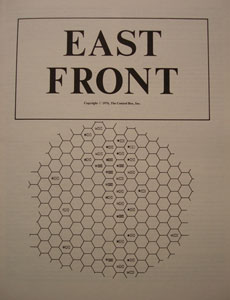 East Front is a simulation on a Corps/Army level of the Russo-German war of 1941-1945. The game covers the entire war from the Axis invasion of Russia to the final destruction of the Axis armies four years later. In addition to the campaign game, there are scenarios covering the invasion of Poland, yearly scenarios for Operation Barbarossa, Stalingrad, Kursk and the Destruction of Army Group Center and a smaller, German High Water scenario cover the period from November 1942 - Jan 1943. The game is unique in that it uses hexagonal shaped counters instead of the standard square counters.