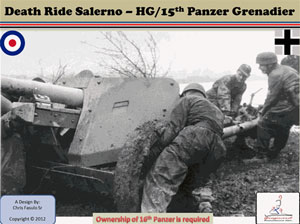 This game is the fourth and last part of the Death Ride Salerno series. It is an expansion game and requires Death Ride Salerno - 16th Panzer to be played. It features the paratroop elements of the Herman Goring Panzer Division and 3 Parachute Regiment. The fight for the city of Salerno is complete and the British 46th UK Infantry Division must move north and begin the process of clearing the way forward to Naples. Resistance is stiffer than expected and the British remain quietly anchored there in relative safety. German units are modeled at platoon and battery level. British units are modeled at platoon, company, and battery level. The game system is relatively easy to learn. If you already have and know a Death Ride system game this one will be a cinch to learn and play. Rules are structured along the 7 Battlefield Operating Systems of Command and Control, Maneuver, Fire Support, Intelligence, Combat Service Support, Mobility and Survivability, and Air Defense.

Charts and Tables to support this part of the battle